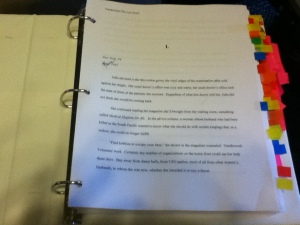 So Wordamour has been quiet the last several months, aside from occasional cross postings when I put up a Huffington Post Geeks Guide to the Writing Life essay (like I did today–if you’re interested in the story of my creative writing Ph.D. or considering one yourself).  That’s because I’ve been busy, busy, among several other projects (including directing the Arkansas Writers MFA Workshop), adding 23,000 words to my novel, The Lost Son, under the advice of my agent.

Yes.  My agent.  I still say that with more than a touch of awe.  In fact, every time I email her and she replies, I think “Amazing.  She really does exist.  She really does.” (Writer friends with agents, did you go through this?  Does it ever go away? I kind of hope it doesn’t.).

Anyway, all of you Nanowrimo veterans (of which the novel is an alumnus) are probably thinking: “23,000 words? That’s nothing.  I can crank out 23,000 words in a long weekend.”  But this was a different type of writing, very focused on certain aspects of the novel and it took me 3 months. Well, really two months and a month of revising the new scenes and making sure they fit seamlessly with the old ones.  It was pretty intense and I was pretty exhausted by the end.  It would not be an understatment to say, however, that I loved every minute of it because I never forgot the reason why I was doing it.

Anyway, what’s interesting about revision is how it’s never finished.  For example, I read the entire novel aloud when I was doing line by line edits before I submitted to agents last summer.  It’s always the last thing I do to make sure I’ve caught everything and to make sure the lines sound the way I want them to.  It takes forever, though, at least a week of listening to the sound of my voice.  So this time I thought, “Well, since I’ve already done it once, maybe I can just read aloud the new scenes and go from there.”  I considered it but in the end, decided to start from the beginning and see what happened.

What happened was:  I caught about a dozen important typos in the first thirty pages (see the photo above with the sticky-flags; every flag represents an edit).  Mind you, this was already after the novel had been revised so many times I’d lost count AND read aloud once before.  In fact, the photo above shows the manuscript with all the edits I had uncovered after the final read aloud.

And those  are just my edits.  My agent’s response to the revision was enthusiastic  (yippee!) but she had some more suggestions.  Nothing serious but at least a few weeks worth of work, which I’m deep into right now, and STILL finding the occasional typo (although fortunately it’s become pretty rare).

So revision.  Never ending, but that is, I think, how it should be.   What writing is all about, really.