Another take on Wonderstruck. . .

My good friend and fellow reader Sue McIntyre reviews Wonderstruck here and asks the question about both the new book and the Invention of Hugh Cabret:  how responsible is it for books to propose that kids could run away or go off on their own like that and survive perfectly well when the worlds they inhabit aren’t exactly fantasy.

I remember worrying about the same thing many years ago when I gave a friend’s nine-year-old a copy of The Mixed Up Files of Mrs. Basil E. Frankweiler.  Was I encouraging her to run away from home?  In the end, I decided the book had been read by millions of children and none I’d heard of had since run off to the Met, so we were probably safe.

Since then both my kids have loved Frankweiler’s book (we took our own Frankweiler inspired tour of the Met a few years back and it was magical) as well as books like The Boxcar Children and Bud Not Buddy, where kids in a seemingly realistic world nonetheless manage to create a child-based kingdom sans adults.  These books follow a very important children’s book creed, albeit in the extreme: Children must be at the center of children’s stories, solving their own problems.  I think it give children a sense of power in a world in which they normally have very little and a sense of exhileration.  At least, I remember having those feelings when I read Mrs. Basil E. Frankweiler and the Boxcar Children as a child.  In fact, I spent a lot of time in my closet back then, pretending it was my own little boxcar, complete with an imaginary chipped pink cup.  I seemed to understand–I think most children do–that these books were in fact, a kind of fantasy wrapped in reality that we weren’t intended to follow.

What do you think?

This is the big project I’ve been alluding to for the past several months.  We found out it was approved today!

For the latest news, check out the program blog.

COLLEGE OF FINE ARTS AND COMMUNICATION

CONWAY — The Arkansas Department of Higher Education today approved a master of fine arts program in Creative Writing at the University of Central Arkansas.

The Arkansas Higher Education Coordinating Board approved the program in a special meeting this morning in Batesville.

Housed in the university’s Department of Writing in the College of Fine Arts and Communication, the Arkansas Writers MFA Program has grown out of a special focus on the literary arts at UCA, a university that not only features undergraduate majors in writing, creative writing, and linguistics but is also home to the international literary journal the Toad Suck Review and the award-winning undergraduate journal the Vortex, as well as the award-winning literary magazine the Oxford American.

The MFA degree in Creative Writing is considered a terminal degree in the discipline.  The only other degree of its kind in the state is at the University of Arkansas.

“Years of work on the part of core UCA faculty, including Associate Professor of Creative Writing Mark Spitzer, who wrote the program proposal, have gone into making this a deliberate, innovative program that is serious about preparing the next generation of writers to succeed in the 21st– century literary landscape,” said Dr. Stephanie Vanderslice, associate professor of creative writing and the program’s first director, who has published three books on re-envisioning creative writing in higher education, most recently Rethinking Creative Writing.  “And this is only the beginning. “

Faculty from the Department of Writing developed a diverse undergraduate writing curriculum and cultivated editing and publishing opportunities through the campus’ two national literary magazines.  Billed as an innovative studio program, The Arkansas Writers MFA at UCA will focus on extensive courses in craft taught by practicing writers, as well courses as in editing and publishing and in the teaching of writing and creative writing.

Students in the graduate program will take classes in teaching composition and creative writing from leading scholars in the field and will gain experience teaching both courses on the undergraduate level.  They will also have the opportunity to pursue a number of internships in the local and regional arts culture.

Rollin Potter, Dean of the UCA College of Fine Arts and Communication, noted that “UCA has taken a leadership position in many arts areas that bring the very best in fine arts learning to our state and region.  Offering a Master of Fine Arts degree in Creative Writing is ‘another jewel’ in the UCA fine arts crown, and an accomplishment that confirms our outstanding faculty and support of arts programs. “

Central Arkansas has become increasingly fertile ground for a burgeoning arts culture that has been profiled in the Chronicle of Higher Education and demonstrated by the growth of the Artists in Residence series at UCA as well as the Conway ArtsFest, UCA’s Arkansas Shakespeare Theatre and the Arkansas Literary Festival.  The Arkansas Writers MFA Program at UCA, moreover, is complemented by an MFA Program in Digital Filmmaking that has been growing by leaps and bounds since it was established by the Department of Mass Communication in 2007.

Fall 2012 will launch the first class of the Arkansas Writers MFA Program, a three-year, 60-credit degree program that will also include the production of a thesis containing original literary work.  The application deadline for the first year will be March 15, 2012.  For more information and an application, check out the program’s website at:  http://www.uca.edu/writing/mfa.

Teaching Creative Writing: And the Irish weigh in. . .

Check out this post about a conference on teaching creative writing in Ireland.  Looks like they’re beginning to put the subject under the lens as well.

I mentioned I was working on a project I was keeping under wraps for the time being; looks like I’ll have more news on that front on Friday. Check back here late in the day or Saturday for the latest news.

So this finally came in the mail. 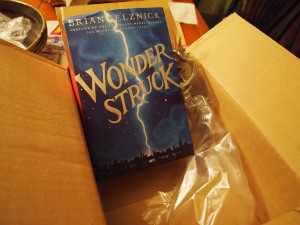 Perhaps one of the most eagerly anticipated packages in a long time.  Needless to say, I began reading it immediately.

At first, I was a little underwhelmed, perhaps because the lead up to this book by game-changing author Brian Selznick was so great.  More lovely writing than The Invention of Hugo Cabret, I was told.  A stunning achievement.

I loved The Invention of Hugo Cabret; I thought the writing was fine the story absolutely enchanting, transfixing.  In other words, Wonderstruck had some pretty big shoes to fill and at first, it wasn’t happening.

Sure, the stories, the textual story about a boy in search of his father, the illustrated story about the girl, fifty years earlier, in search of a her mother, were interesting enough but there were no fireworks.  Until. . .

The stories began to merge.  The Museum of Natural History came into play in a big way with cabinets of oddities and allusions to the Mixed Up Files of Mrs. Basil E. Frankweiler,  Then there were the references to he 1964 World’s Fair, the Queens Museum and the panoramic replica of New York City that is housed there (I’ve stood before it in awe myself) and finally, the New York City blackout of 1977.

A children’s book, yes, but also a Generation X book if there ever was one, right up there with Rebecca Stead’s When You Reach Me, about growing up in New York City in the ’70’s.

One smile of recognition after another.